A call for a more fair presentation of cases was put forth before the Student Judiciary in 1971, causing the creation of the Defender/Advocate Society. The Student Government Association later disbanded for a short time on campus, and the responsibilities of the Judiciary moved under the supervision of the Vice President for Student Affairs.  Other important changes occurred over the years, such as the creation of an administrative hearing for students wishing to take responsibility for their violation and transferring the hearing and adjudication of academic dishonesty cases to the Office of the Vice President for Instruction.  Most significantly, the membership of both the Student Judiciary and the Defender/Advocate Society voted unanimously to approve new bylaws that joined the two organizations under one Council in 1997.  The single organization has continued to operate under the name of The University Judiciary since that time.

We, the University of Georgia Judiciary, seek to foster respect within the University Community through adherence to the Code of Conduct, by utilizing proactive education and a fundamentally fair conduct process.

Outreach
Click here to submit a request for a University Judiciary outreach program.

Location
The Office of Student Conduct is located on the 2nd floor of Memorial Hall. It is the white building located next to Sanford Stadium. When visiting our office, check in at room 247 located in the hallway between the Hooper Street and Reed Alley entrances to Memorial Hall. 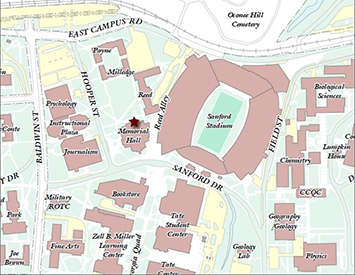 Report a Potential Conduct Violation
Individuals interested in submitting a report of potential Code of Conduct regulation violations should do so in writing. Reports not submitted in writing will be independently verified prior to beginning a conduct investigation. Reports should be submitted as soon as possible after the alleged violation. For individuals filing a report, a meeting can be arranged with a staff member in the Office of Student Conduct to discuss the conduct process. Reports should be submitted to Rebecca Scarbro, Associate Director for Student Conduct, by calling 706-542-1131 or emailing rcw34@uga.edu.